Quite recently, photos of girls in the mirror posted on social networks caused a smile. Taking pictures of myself seemed the height of narcissism and stupidity.

But since about 2013, such pictures have become wildly popular and they began to be viewed as a social phenomenon. At present, it is difficult to name the one who came up with the idea of ​​​​taking a selfie, but we will try.

The first selfie in history
To determine who was the author of the first selfie, you need to look into the history of photography.

The study of photographs indicates that the inventor of the selfie was a photographer from America, Robert Cornelius.

The picture is very old, almost 200 years old, and, of course, time has left its mark on it. Despite everything, this work is the first own photographic portrait in history.

First selfshot
The first group photograph of themselves was made in the winter of 1920 by a group of photographers who worked for the Byron Company in New York.

Interestingly, the picture was taken on the roof of the photo studio. The company forgot to bring a tripod and had to hold a rather imposing camera at arm’s length. So simple childishness entered the history of photography as the world’s first self-shot.

Of course, the term “selfie” had not yet been coined at that time. This word was first mentioned on the Internet relatively recently and has firmly entered our lives, like a kind of photography. 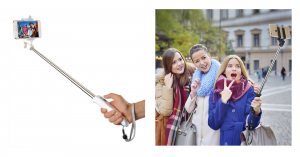 In relation to these pictures, the term “self-portrait” seems inappropriate, and no other suitable definition was found. Therefore, a new word, borrowed from the English language, appeared in our speech.

The advent of the selfie stick
The mirror is often used to take selfies. But what if he is not around?

You can use side or front cameras in phones, but they do not always provide good quality photos.

In addition, arm’s length is sometimes not enough to capture everything you need.

Some time ago, a new convenient invention appeared on sale – a selfie stick. It is not particularly complex in design: it resembles a telescopic baton or a fishing rod – it is a sliding device, at the end of which a latch is installed.

A device is inserted into the fixation point and the stick is extended to the desired length, then the desired angle is selected and a picture is taken.

Usually a selfie stick is used to take group photos, but special craftsmen are able to catch completely unexpected angles with the help of this invention. It is this suddenness and the ability to capture the moment that distinguishes the selfie from other types of photography.

Interestingly, this device was officially patented in America about 30 years ago. Its authors are Japanese designers.

However, this invention did not arouse much interest among the public, because. interest in selfies woke up much later. At first, the selfie stick interested only professional photographers and amateur photographers.

Now this is a fairly popular device. Times magazine announced that the selfie stick was invented in 2014. But in this case, there is a use of the old device for new purposes.