For the first time, it was possible to photograph the surface of the Earth from more than a hundred kilometers high thanks to German engineers. During the Second World War, they made a real breakthrough in the field of rocket science.

After the capitulation of Germany, the technology was taken over by the USSR and the USA, which began to actively use it for the construction of ballistic missiles. 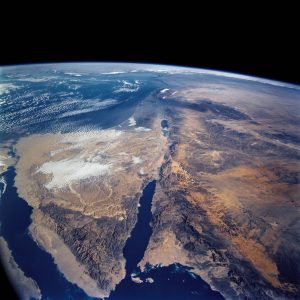 On October 24, 1946, a V-2 rocket was launched in New Mexico. A participant in this program, an American engineer K. Holiday, developed a special thirty-five-millimeter movie camera. She was loaded with sensitive film, and set up to take a picture every one and a half seconds.

The rocket rose to a height of 105 km, thus overcoming the Karman line, which (according to the international classification) separates space from the atmosphere. After that, the rocket began to fall, and crashed into the Earth at a speed of 540 kilometers per hour.

When the military arrived at the crash site with scientists, the latter were happy to find the steel capsule safe and sound.

A little later, the first black-and-white photo of a part of the planet was obtained, on which clouds could be distinguished.

This result was incredibly important for world science, since before that high-quality photos were obtained from a height of no more than 22 km. And from a hundred-kilometer altitude, the Earth appears almost the same as from low Earth orbit.

In general, for the period 1946-1950, at least a thousand photos of the planet were taken with the help of V-2. In 1950, these photos were first published by National Geographic.

In an article accompanying the images, Holiday wrote: “This is what the Earth will look like in the eyes of incoming aliens.”